Tipiṭaka is a repository of the Buddha's word which was the resolution of the First Great Tipiṭaka Council, convened by his deciples immediately after the Buddha had attained Nibbāna during the First Buddhist Era (BCE 544-545); thus, the oldest source of the Buddhist Canonical Scriptures. The sound of Tipiṭaka scriptures was transmitted orally for over four centuries in Pāḷi dialect, an ancient sound of the Indo-Aryan linguistic family. The Pāḷi Tipiṭaka in oral tradition was inscribed for the first time in Sinhala script on palm-leaves artifact in old Sri Lanka in 110 BCE. Since then, from this cradle of the written scriptures, the Pāḷi text was gradually transliterated into various international scripts of the world and was subsequently translated into different languages. 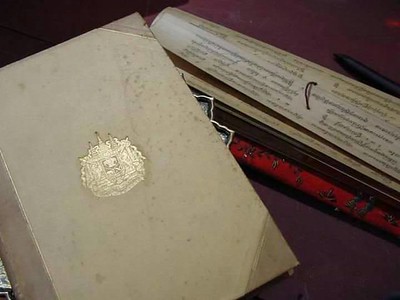 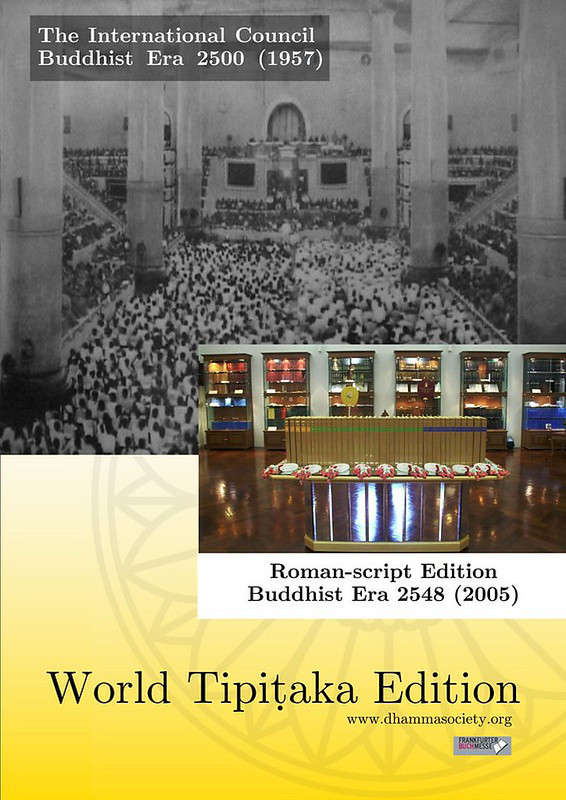 Despite, the translation of the Pāḷi text, the significance of the Pāḷi Tipiṭaka recitation continues to have its functional and sacred legitimacy. For it has been continuously practiced as recorded in the Book of Vinayapiṭaka Discipline since the Buddha's time that the Pātimokkhapāḷi Disciplinary Rules are to be recited by the monastic community every fortnight in the pristine purity of the original Pāḷi sound. Furthermore, it is of the utmost importance that each sound of the alphabet must be enunciated correctly in accordance with the place and the manner of articulation in the Pāḷi Tipiṭaka grammar since a monk who, for instance, mispronounces an aspirated sound to be unaspirated sound or vice versa during the all important oral ordination preception, will thereby commit an offense and the ordination will not be consummated (see Mahāsaṅgīti Tipiṭaka Buddhavasse 2500, Vol. 5, Vinayapiṭaka, Parivāravagga No. 455, and No. 485 in Roman-Script 2005 Edition). 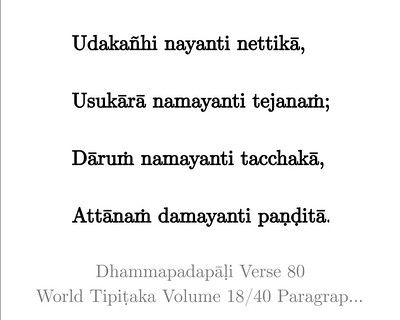 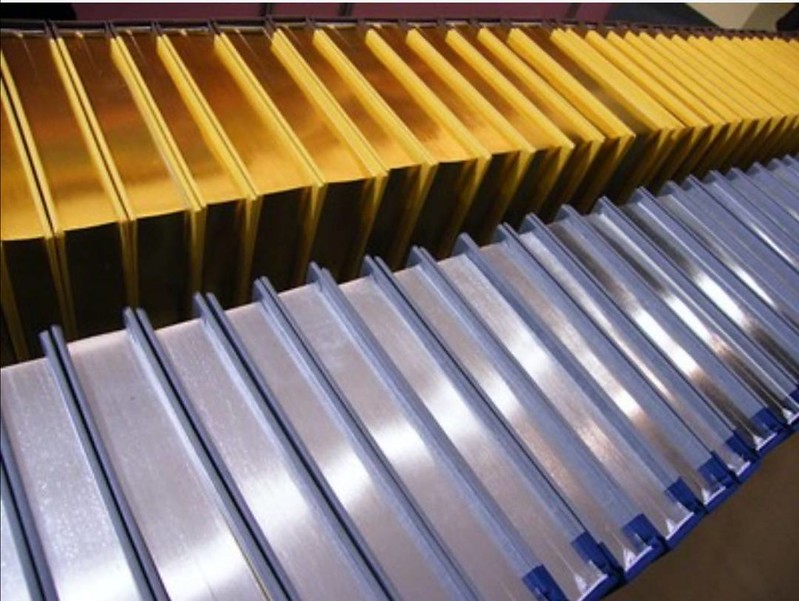 The world's first printed set of the Pāḷi Tipiṭaka was the 39-volume Chulachomklao of Syām 1893 Edition, then written in Syām-script, a new orthographic writing system. The Syām-script orthography was uniquely invented with distinctive Pāḷi phonetic symbols to differentiate between non-final consonant, final-consonant and cluster-consonant syllables. These three phonetic symbols in Syām-script were regarded not only as the most complete printed Tipiṭaka transliteration in bookform but also the pioneering phonetic transcription of the day. 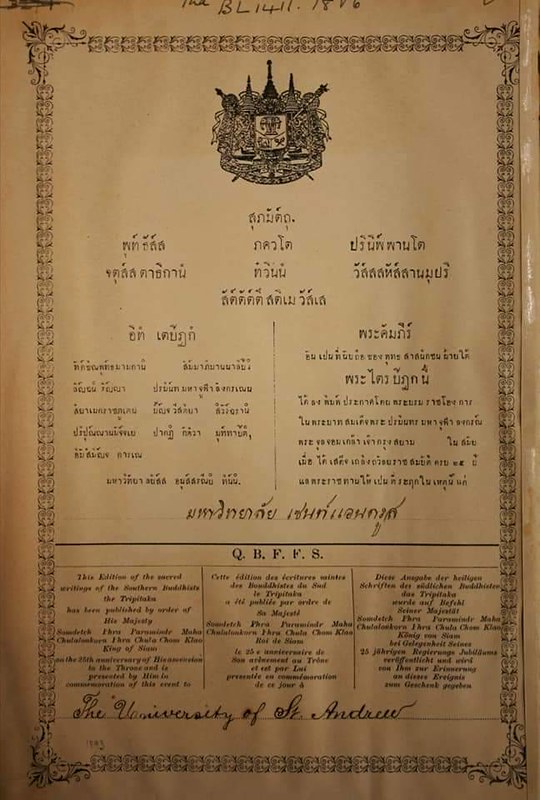 The Roman-script transliteration for printing the Pāḷi text was introduced in Europe in 1888 but the complete Roman-script Pāḷi Tipiṭaka Edition in forty volumes, based on the latest International Tipiṭaka Council 1957 Edition, was published in 2005 in Bangkok by the World Tipiṭaka Project. The new proofreading and Roman-script typesetting, as well as, the creation of the first phase of the Tipiṭaka database in XML format was undertaken under the patronage of His Holiness Prince Krom Luang Vajirañanasaṁvara, the Supreme Patriarch of Thaland, who himself, was one of the representative Pāḷi scholars from Thailand to attend the historic international council in Yangon, the old capital of Myanmar. The new edition was entitled Mahāsaṅgīti Tipiṭaka Buddhavasse 2500 (The Great International Tipiṭaka Council B.E. 2500/1957 Edition). The special inaugural edition was presented to President Chandrika Bandaranaike Kumaratunga of Sri Lanka as a royal gift of Dhamma from Her Royal Highness Princess Galyani Vadhana, grand-daughter of King Chulalongkorn Chulachomklao. The Princess Patron made a special Tipiṭaka Pilgrimage to Colombo upon an invitation of the President of Sri Lanka. Today over 150 special sets have been presented to the leading international libraries worldwide. Recently, the second edition in Roman-script published in 2019 with the newly revised International Phonetic Alphabet in Pāḷi (Pāḷi IPA), was presented to the British Library in London for the special exhibition on Buddhism between 2019-2020. 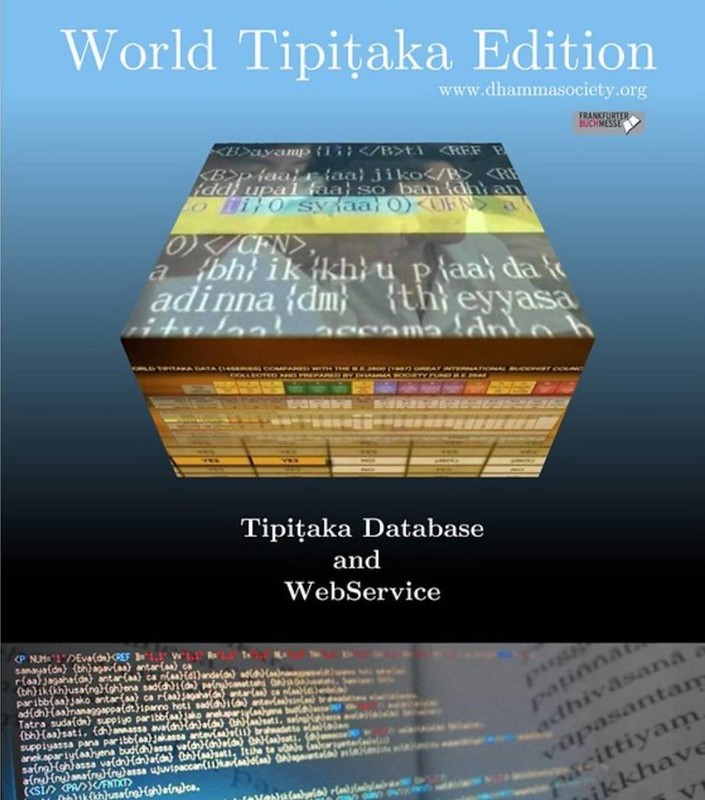 In 2014, Professor Dr. Chidchanok Lursinsup, a Royal Fellow in the Science Academy of Thailand, published a groundbreaking article, employing sixty-one mathematical formulae to decode the Syām-script orthographic writing of Chulachomkloa Edition. His references were based on Kaccāyana Vyākaraṇapāḷi, the oldest and one of the most important exegesis of the Pāḷi Grammar, as well as, Pāḷi-Syām to Pāḷi-Roman phonetic transcriptions. The analysis confirmed that Syām-script edition, was in fact a linguistic innovation in phonetic transcription and syllabic segmentation for the Pāḷi Tipiṭaka publication a century ago. The "Chidchanok Mathematical Formulae", made it possible for the World Tipiṭaka Project to develop an automatic computer program for syllabic segmentation of the entire World Tipiṭaka Edition in forty-volumes. 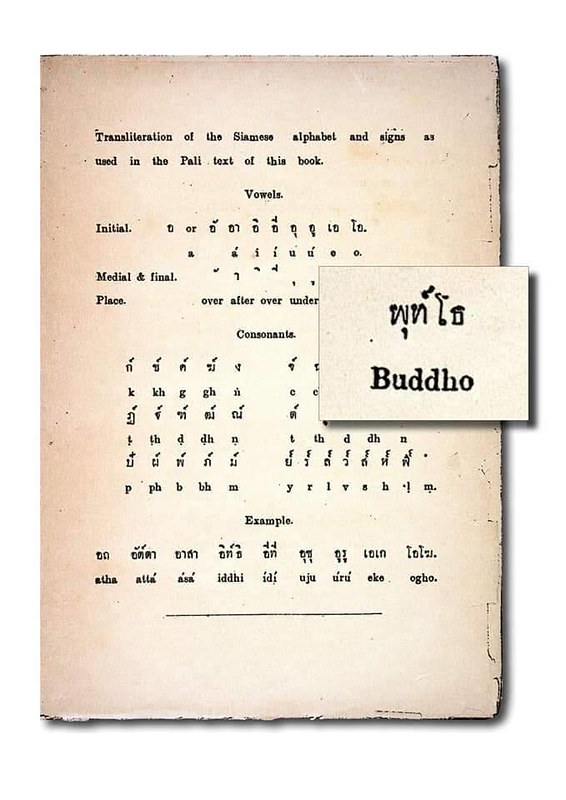 In 2015, the World Tipiṭaka Foundation received a Patent No. 46390, entitled the syllabic segmentation programme for the electronic devices in accordance with the 1893 Syām-script orthography. Hence, the new possibility for the World Tipiṭaka Project to study linguistically the electronic database corpus of the digital Tipiṭaka, comprising 2,767,074 words, 9,422,422 syllables, or 20,946,860 characters in Roman scripts. 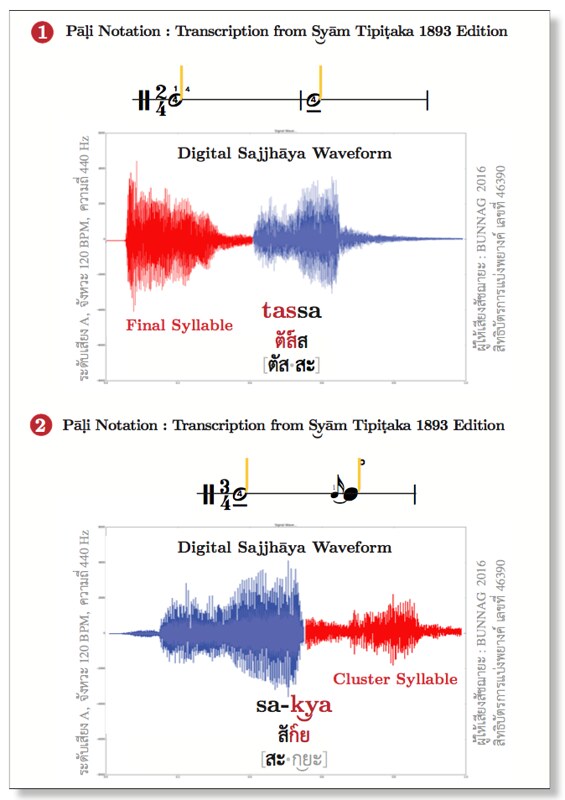 The Pāḷi Tipiṭaka Notation is the final phase of the World Tipiṭaka Project (1999-present). It aims to integrate the traditional Pāḷi transliteration of monastic culture into the Pāḷi phonetic transcription in modern linguistics, as well as, to create a new notation in musical symbol as an international standard. Based on the World Tipiṭaka Patent No. 46390 and pronunciation rules of the Pāḷi Tipiṭaka Grammar of old, Dr. Sasi Pongsarayuth, Associate Professor of music from Chulalongkorn University, proposed an international musical notation for the new Pāḷi Tipiṭaka transcription in order to replicate the recitation sound of the Tipiṭaka scriptures. In order to transcribe the Pāḷi sound into the new notation, 95 different symbols have to be created. There are altogether newly-designed 225,964,457 symbols to be typesetted digitally for the forty-volume set of the World Tipiṭaka in phonetic manuscript. The Pāḷi Tipiṭaka Notation was the result of an interdisciplinary research which in 2019 received an award for the best research from Chulalongkorn University.

There are four versions of the Pāḷi Tipiṭaka Notation for four different study purposes, namely: Lahu (one metre) and Garu (two metres) rhythms; manners of articulation; places of articulation; and digital electronics. Each version comprising of 250 volumes is now available both in bookform and digital data file. The digital audio recording from the Pāḷi Tipiṭaka Notation Edition amounts to 3,052 hours or 1.6 Terabytes. 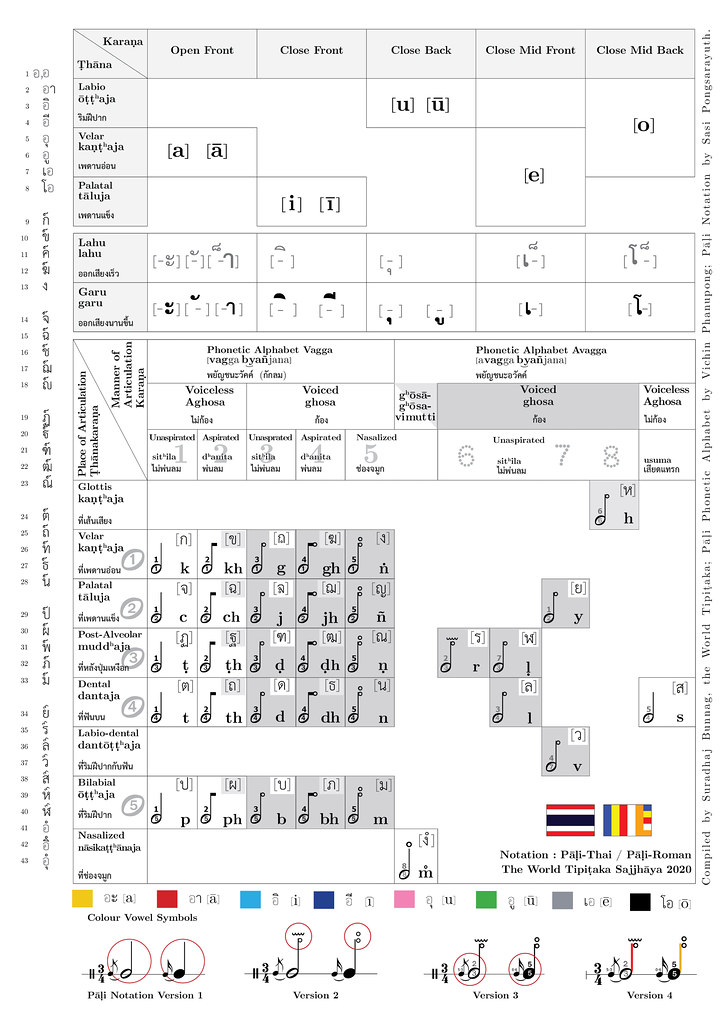 In 2017, the recording of the Pāḷi Tipiṭaka Notation or the Digital Sajjhāya Recitation Sound was successfully synthesized into electronic devices as manufacturing prototypes for smart phone and tablet models. An example of Sajjhāya electronic device was selected for Digital Big Bang Exhibition in Bangkok 2019. 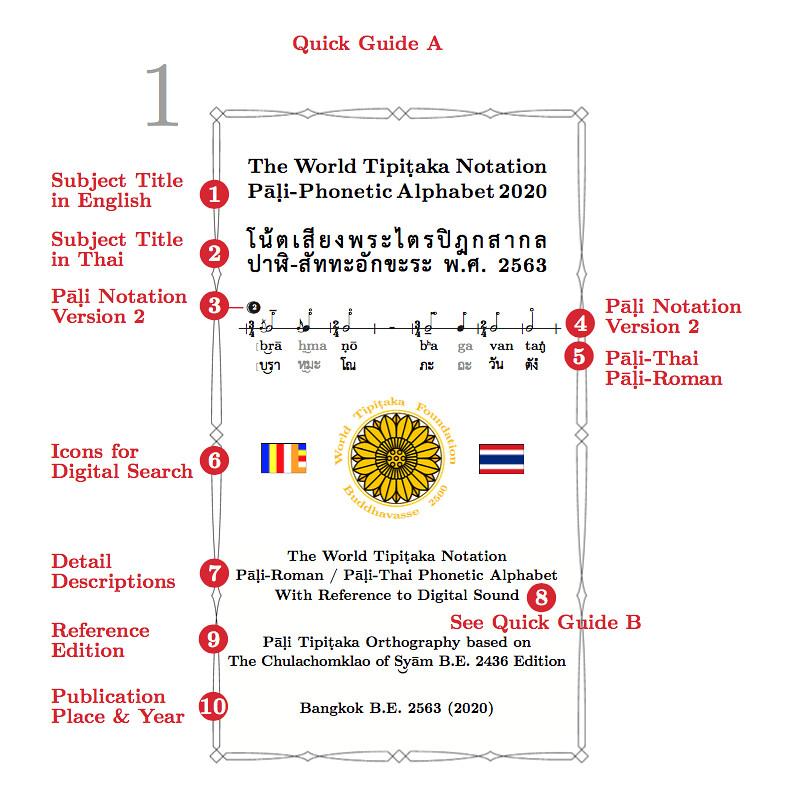 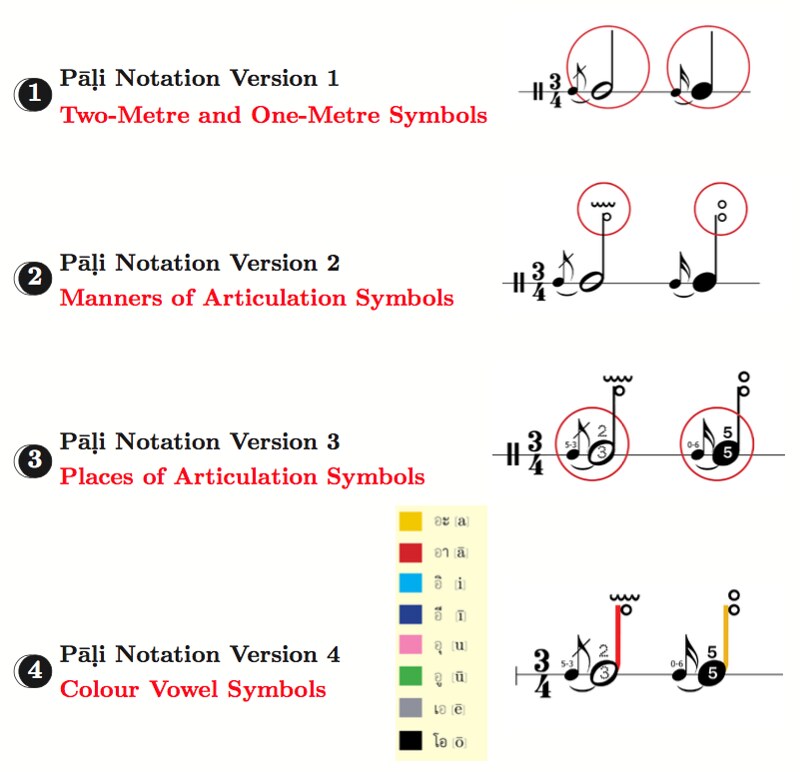 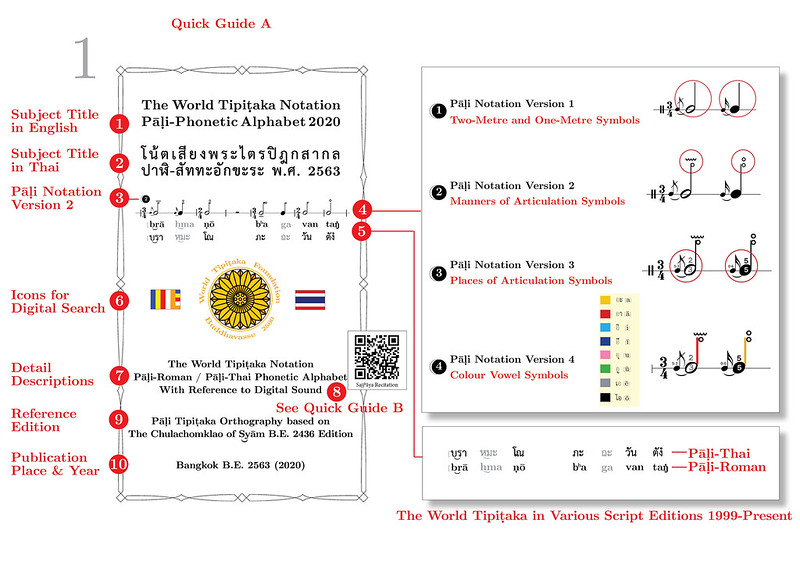 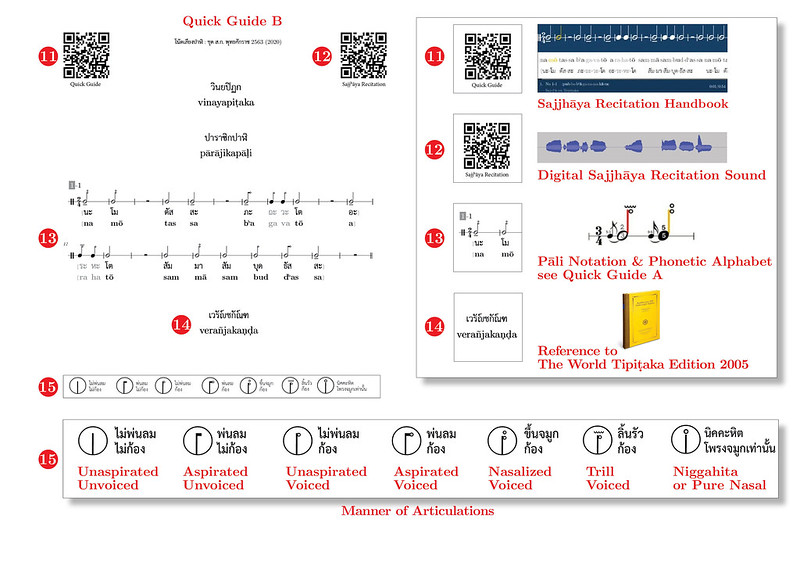 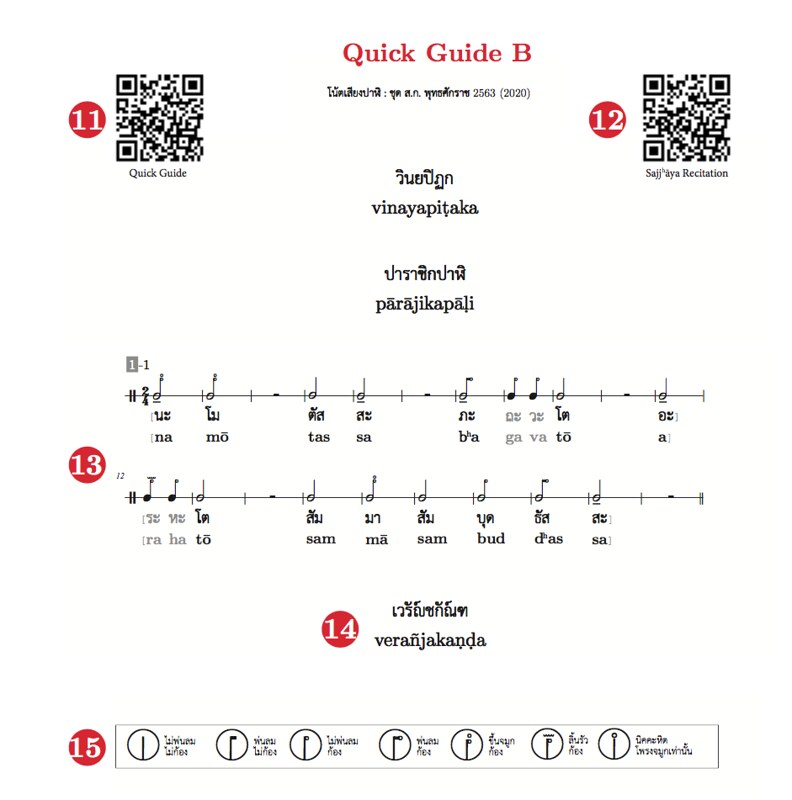 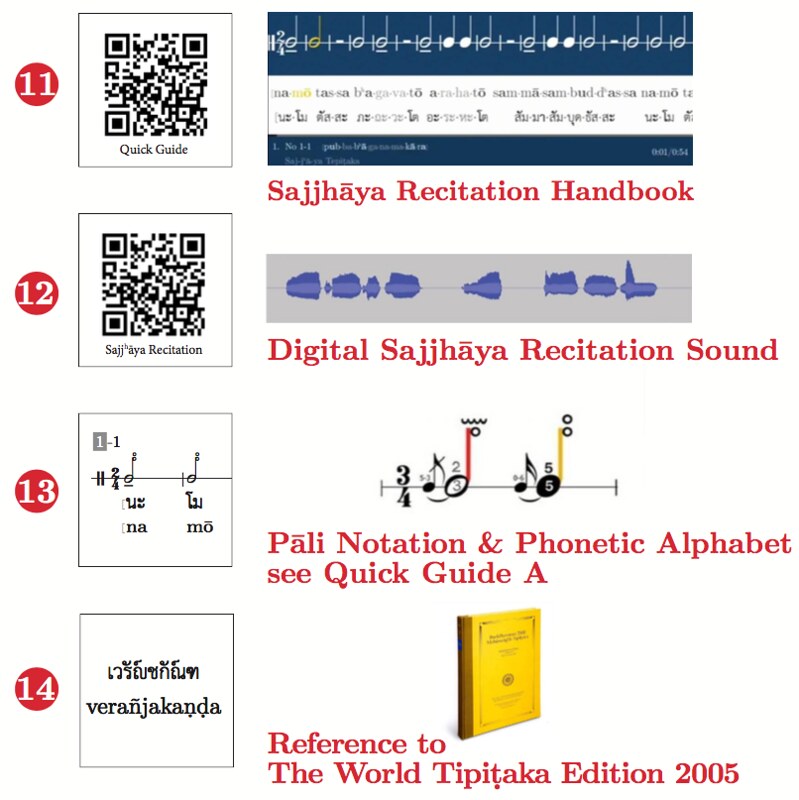 In 2020, the Pāḷi Tipiṭaka Notation was retypesetted electronically in a new parallel corpus for the digital database which can be published with four different sets of the phonetic alphabet combinations for study and easy pronunciation worldwide; namely: 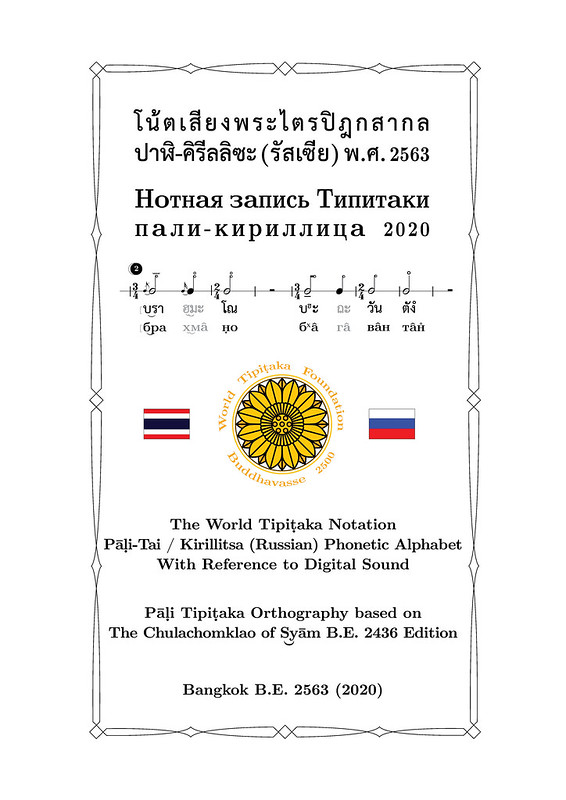 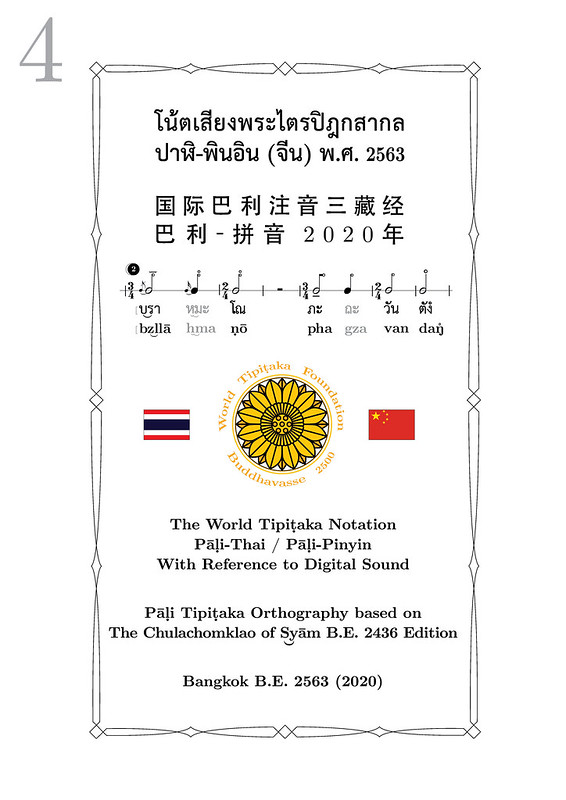 The new Pāḷi Tipiṭaka Notation is therefore an innovation in the interdisciplinary studies of the digital Pāḷi text, cultural linguistics and applied musicology. The recitation of the Pāḷi sound can be strictly transcribed with digital accuracy both linguistically and electronically into international musical symbols and notational scores for the first time. It is the culmination of the international efforts to replicate the sound of the Buddha's word, or The Pāḷi Code ; comprising of forty-one Pāḷi consonants and eight pure vowel sounds, which was committed to memory by his erudite and enlightened disciples as recorded in the First Great Tipiṭaka Council over two millennia ago. 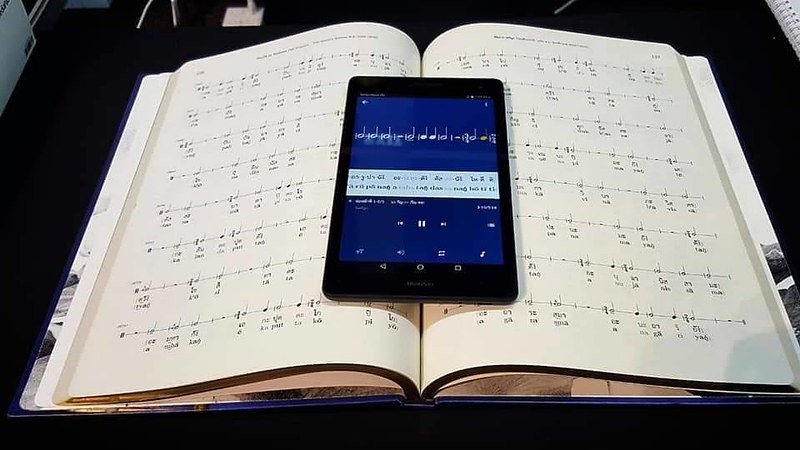 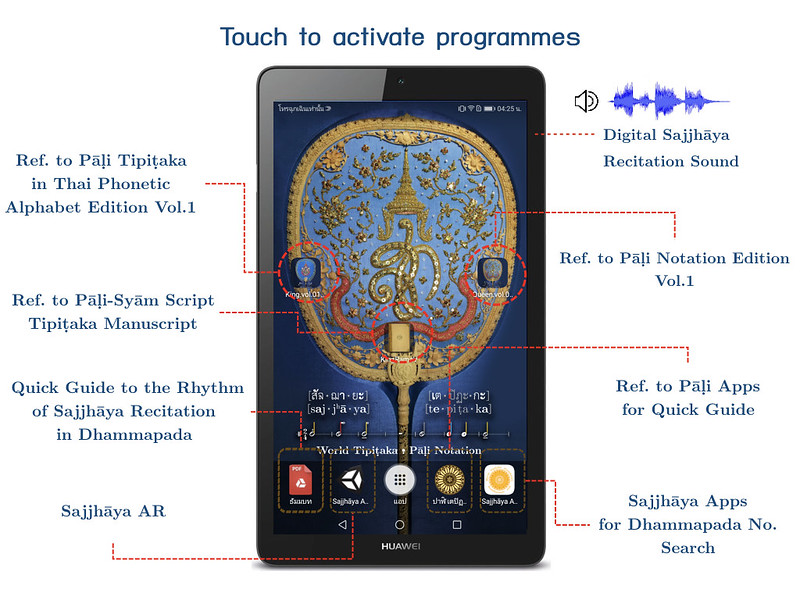 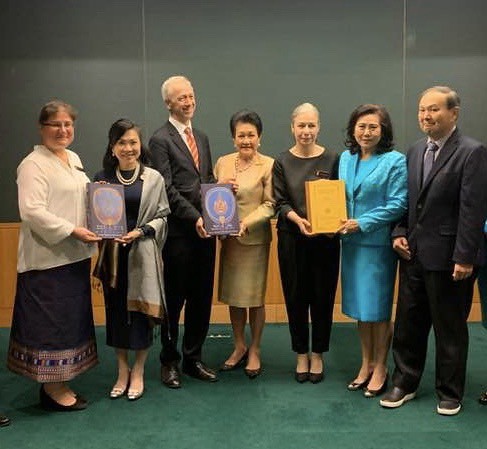 This complete digital transformation of the Pāḷi Tipiṭaka into the World Tipiṭaka Big Data is aimed to facilitate further development of the Tipiṭaka Artificial Intelligence Technology. With the recent breakthrough of the World Tipiṭaka digital transformation, it is now possible for the World Tipiṭaka Foundation to make this digital wisdombase available not only for the international students of the Tipiṭaka studies in various cultural traditions but also the scholars of the interdisciplinary studies as well, particularly in digital-based knowledges, in areas which are not traditionally associated with the Pāḷi text, such as musicology, acoustical engineering and medical science technology, but whose potential expertise can contribute immensely for the effective implications for the future society and the sustainable well-being of humanity both body and mind. 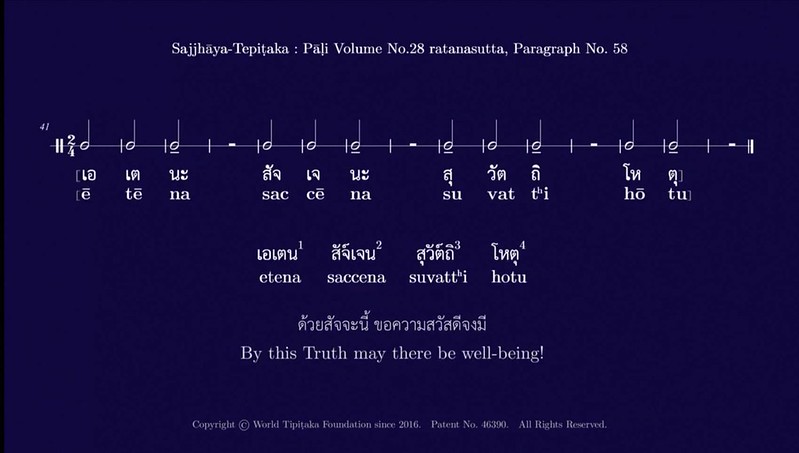