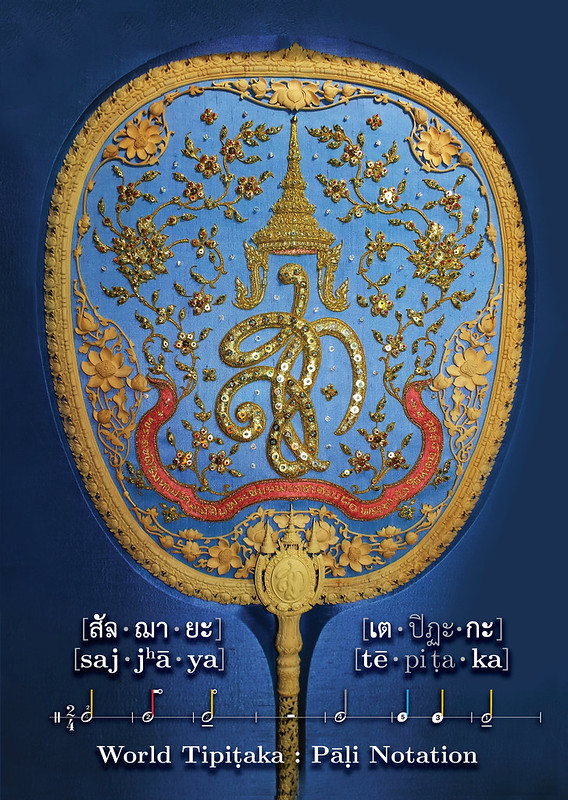 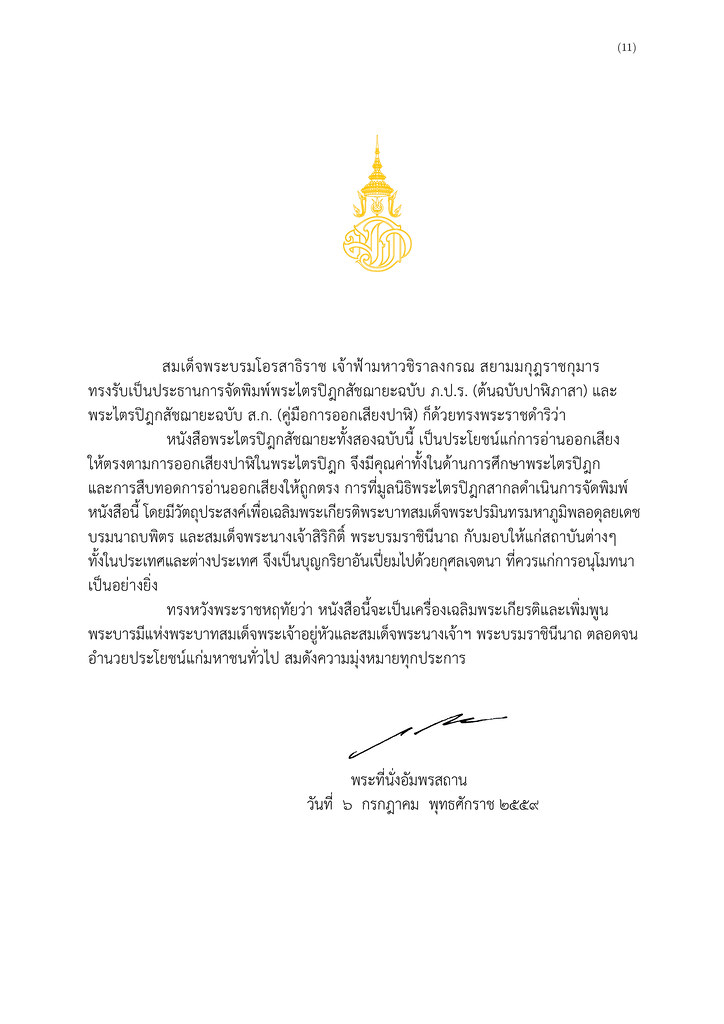 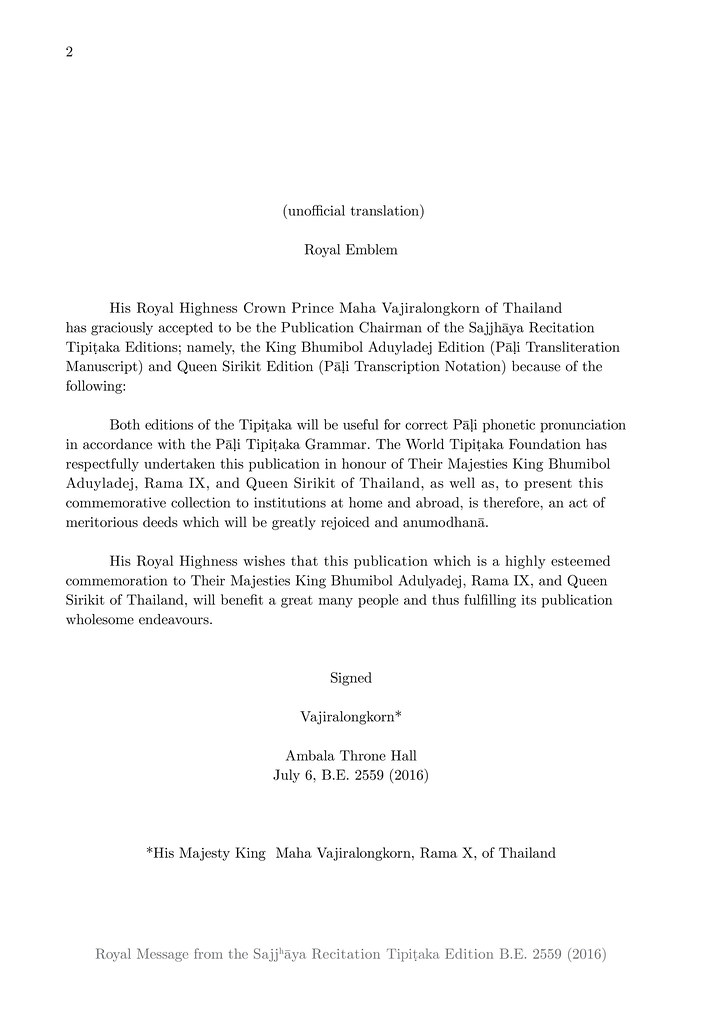 The World Tipiṭaka Notation is the culmination of 20 years’ work of the World Tipiṭaka Project which was undertaken under the Patronage of His Holiness Prince Krom Luang Vajirañāṅasaṁvara, the Supreme Patriarch of Thailand. It was based on the two most important Tipiṭaka manuscripts. First, the Pāḷi text was based on the Roman-script edition entitled Mahāsaṅgīti Tipiṭaka Buddhavasse 2500 (The Great International Tipiṭaka Council Buddhist Era 2500) which was published in 2005 as the complete 40-volume World Edition for the first time.

Second, it was based on the Sound of Lahu (quick) and Garu (prolonged) syllables, the orthographic writing of which has been phonetically transcribed from the Chulachomklao in Syām-Script Tipiṭaka 1893 Edition. Furthermore, the Pāḷi syllabic segmentation was based on the innovative phonetic symbols in the Syām-script edition which made it possible for the World Tipiṭaka Project to develop a computer programme for Lahu and Garu syllabic segmentation electronically. This programme received a Patent No. 46390 and was used to ensure the digital accuracy in the publication of Lahu and Garu transcription notation .

There are 406 Pāḷi Phonetic Symbols for aspirated, voiced, and Niggahīta sounds, for example, which have been newly created to replicate the original Pāḷi manner of articulations in according to pronunciation rules described in the Kaccāyana’s Grammar, the oldest and the most important of the Theravādin grammar. The Pāḷi Notation is therefore the result of the interdisciplinary studies between 2016-2017 under the National Research Council of Thailand which received an Award for Research Excellence in 2019.

It is hoped that the World Tipiṭaka Notation Handbook which is specially printed with QR Code for Digital Sajjhāya Recitation Sound from the 250-volume edition, totalling 3,052 hours or 1.6 terabytes, will both facilitate and revitalise the Tipiṭaka pronunciation of old, as well as, the Pāḷi phonetic studies, the applied musicology, and the AI sound technology of the future.

The World Tipiṭaka Project
Under Patronage of His Holiness
Prince Krom Luang Vajirañāṅasaṁvara,
The Supreme Patriarch of  Thailand 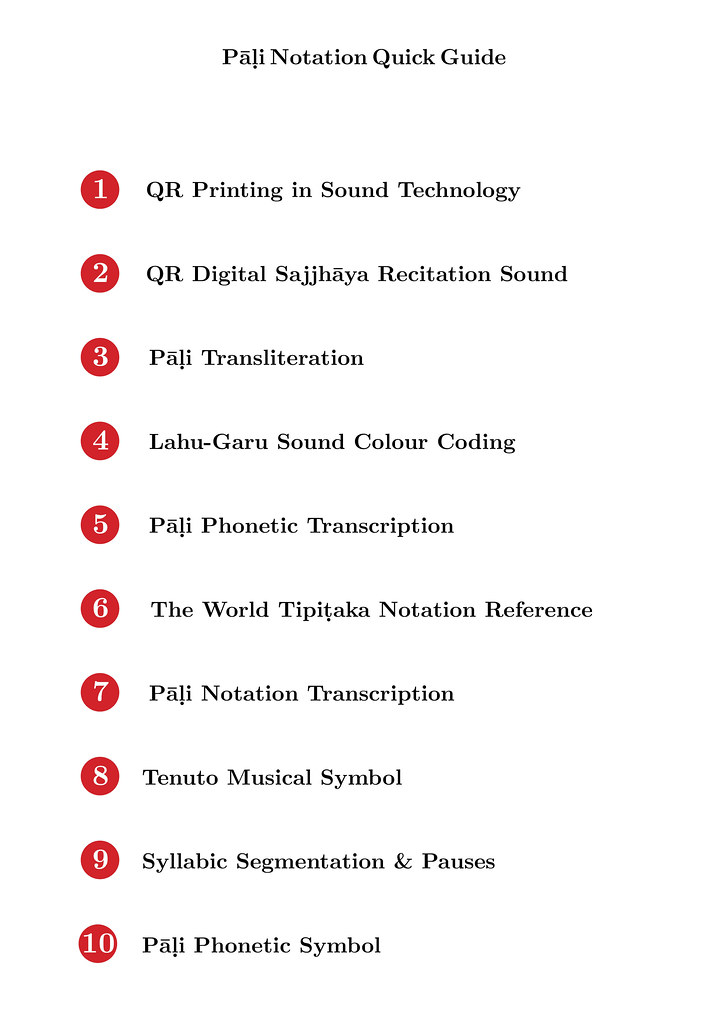 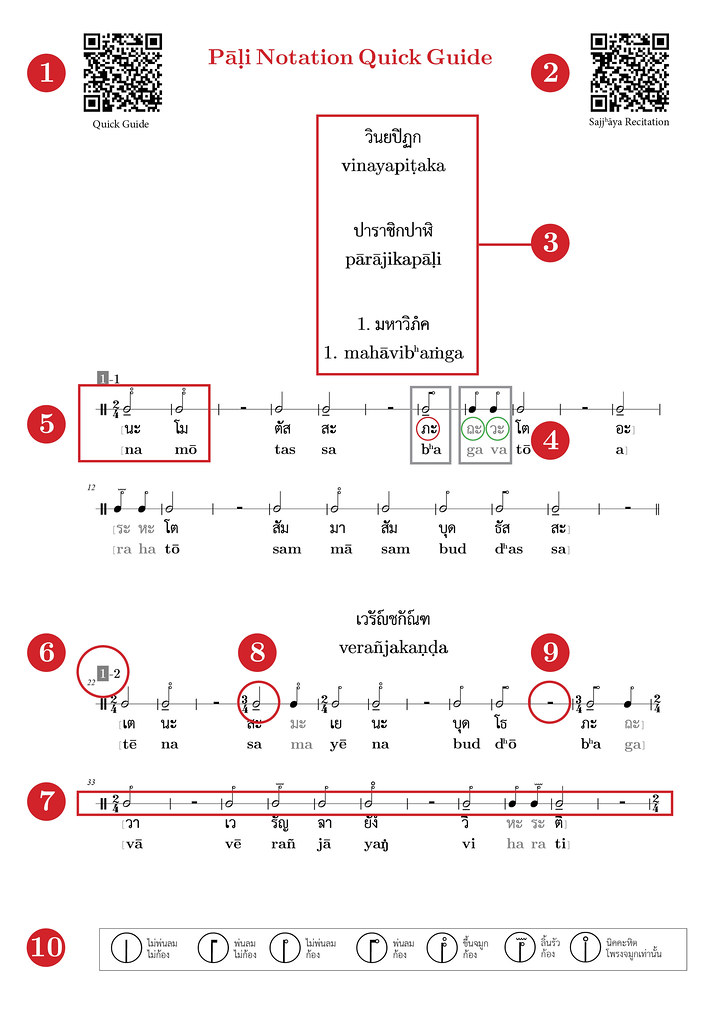 The Phonetic Symbols are printed at the tails of the notes in accordance with the Pāḷi Manner of Articulations in Kaccāyana Grammar, the reference of which is based on Sasi Pongsarayut's research under the National Research Council of Thailand, 2016-2017. The research received an Award for Excellence from Chulalongkorn University in 2019.

Quick Guide to Pali Notation by Dhamma Society on Scribd